UK Parliament Week, Interfaith Week to be celebrated by Forum for International Relations Development (FIRD) and APPG Faith and Society

As we mark 100 years since the first women gained the right to vote, FIRD and APPG Faith and Society are hosting the Faith in Politics seminar, hosted by the Rt. Hon. Stephen Timms MP, to mark UK Parliament Week and Interfaith Week and play a part in our thriving democracy. The seminar is being arranged on Tuesday 13th November 2018, at 2.00pm in Committee Room 19 of the House of Commons.

UK Parliament Week and Interfaith Week are UK-wide festivals taking place from 12-18 November, which aims to engage people of faith from different backgrounds and communities, with Parliament and empower them to get involved. The Week is timed to begin on Remembrance Sunday, which this year is the Centenary Armistice Day, with an opportunity to remember the service of soldiers and civilians of different faiths and beliefs. 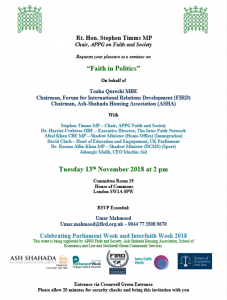 UK Parliament Week is part of the UK Parliament’s Vote 100 programme, celebrating equal voting rights and other milestones in the UK’s democratic history. A record high of 32% women MPs were elected to the House of Commons in 2017’s General Election. There is further to go in encouraging diversity; UK Parliament invites people of all backgrounds to have a say in their democracy. A record number of MPs are representative of their faiths, with Christians, Muslims, Jews, Sikhs and the like entering politics, some for the first time. In 2017, UK Parliament Week reached more than 360,000 people, with over 4,500 events. Interfaith Week had over 700 events with over 750 organisations taking part.

Rt. Hon. Stephen Timms MP, Chair of the APPG on Faith and Society, said: “I am delighted that the Forum for International Relations Development are organising this event to celebrate UK Parliament Week and Interfaith Week. Faith is a great starting point for politics because faith inspires exactly the values we need to make politics work: responsibility, solidarity, patience, compassion, truthfulness, tolerance. Far from being a problem, religious conviction is inspiring vital community initiatives and campaigns for social justice at a national and international level. I hope as many as people as possible will be able join us in the House of Commons on 13 November as we look to equip our institutions to work respectfully with people whose starting point is faith.”

Toaha Qureshi MBE, Chairman Forum for International Relations Development said: “We have been organising separate events around faith and democracy for two decades and in 2017 we decided to host the first joint UK Parliament Week and Interfaith Week conference titled ‘Engaging Faith Communities with British Democracy’ at the KN Centre where Lord Alderdice and Tim Farron MP were the keynote speakers. This year we have a brilliant line up speakers and attendees including parliamentarians, faith leaders, academics, community leaders and charities. In this day and age, it is almost impossible to talk about faith or politics without the other. Faith remains a potent presence at all levels of politics in the UK, with numerous leaders stating that faith has either guided their decisions or played an important role in the views. With so much negativity in the world, we are proud to team up with Stephen Timms MP and the APPG on Faith and Society to spread positivity and interfaith harmony, building a cohesive nation.”

David Clark, Head of Education and Engagement at UK Parliament, said: “There are many exciting events as part of this year’s UK Parliament Week, and we are delighted FIRD and APPG Faith and Society are taking this opportunity to get involved in their democracy and also to celebrate one of the most important centenaries in British democratic history. We can only work towards a more equal society if we all engage with democracy which is why FIRD’s/APPG on Faith and Society support is so important.” Rt Revd Richard Atkinson OBE and Jatinder Singh Birdi, Co-Chairs of the Inter Faith Network, said: “We hope that this year even more individuals and organisations will take part, encouraging yet wider involvement in activities to strengthen inter faith understanding and cooperation.”

Umar Mahmood, organising the event, said: “Faith is becoming increasingly important in society and has crossed over to many of the important areas of community. It is vitally important that we build bridges between faith and statutory bodies, including the Parliament and Met Police, so that it can be more representative of today’s world. As the young look towards parliament, it must mirror what they are seeing in their own lives and communities. I believe that we have to engage with young people of faith, particularly Muslims, to find out why their faith matters to them and get past stereotypes and misunderstandings. We have a duty to increase religious and parliamentary literacy and this seminar is how FIRD, APPG on Faith and Society and other partners are doing this.”