Toaha Qureshi MBE, Chairman Ash-Shahada Housing Association, said that it was a Muslim-led housing association, the first of its kind to be established in the UK in 1989. As a registered social landlord, ASHA has been providing housing in hostels, flats and houses in the prestigious London Boroughs of Lambeth and Southwark. Mr. Qureshi MBE said that ASHA has 149 general needs homes and 51 hostel bed spaces, with 62 permanent dwellings in management in Lambeth and 21 in Southwark. He shared with the audience reception audience their plans to move from a London-based housing association to expansion in the midlands and beyond to meet the real needs of England’s housing crisis. Mr. Qureshi MBE said that the UK was facing a huge crisis stemming from inequality and poverty: rising use of food banks, increasing levels homelessness, growing need for providing BME communities housing etc. To tackle these issues, he said that it was important that more BME and Muslim led housing associations are fostered to lead the way to solving these issues. Too many people fall through the cracks in society through lack of housing, more so since austerity cuts, and more so outside of London. Mr. Qureshi MBE vowed to use his resources to take these problems head on. Speaking on the celebration of Eid, Mr. Qureshi MBE appreciated the various people of faith and none who were in attendance to celebrate the joyous occasion. Eid marks the conclusion of the Hajj pilgrimage and is a sign of equality and community resilience. Referring to a statement made by the famous activist Malcolm X after his pilgrimage stating “They asked me what about the Hajj had impressed me the most…The people of all races, colours, from all over the world coming together as one!”, he asserted that every man and woman is equal in the eyes of God, no matter their colour, nationality or background and it is on this basis that we can create a fairer society. He concluded that it was important for the Muslim community to work with other faiths to build bridges.

Helen Hayes MP, Member of the Housing, Communities and Local Government Select Committee, said that there was a particular resonance of the theme of sacrifice and resilience in Eid that was shared by the community. In Eid we have a reminder to look after those in our community who need help and support, to work to address the challenges and divisions which are making life harder for many people. The challenges, according to Helen Hayes MP, include poverty, national and global uncertainty and those who wish to divide the community bonds. The commitment of thousands of Muslims to the Holy Pilgrimage, Hajj, is testimony to the equality shown through Islam. We live among people of many different faiths and the freedom to worship and live out one’s faith is one of the most precious aspects of British democracy, she added.

Helen Hayes MP added that the story of Abraham, which is recalled in Eid Al Adha, is shared by Muslims, Christians and Jews and it is festivals like these that allow us to come together to remind ourselves of the humanity we share and to redouble our efforts to fight racism, prejudice and division wherever they are found with a strong and united front. The need for this has never been greater. 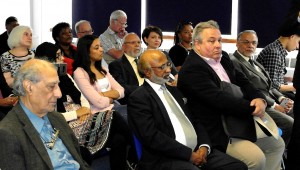 Speaking on housing, Helen Hayes MP said that this was the single biggest practical issue facing her constituents. The government has some very serious challenges in this area and it is no exaggeration to refer to it as a housing crisis. She said that it was extremely difficult for people to access genuinely affordable social housing they need. The definition set by the government is also problematic because because many people fall outside of the reach. In that context, small specialist housing associations like Ash Shahada with a very strong sense of social purpose for the community they serve, is vitally important. The need for support housing is growing with the ageing population as well as sheltered housing which includes housing to support people with learning and physical disabilities, mental health needs, survivors of domestic abuse and those in rehabilitation. An inquiry into the housing crisis, led by Helen Hayes MP, showed that the government’s approach has not been working and found that it was stifling new supply. The government changed its approach as result of the report toward funding of supported housing. Helen Hayes MP wished ASHA success on its growth plans and was delighted to hear that they plan on going further into supported housing.

Helen Hayes MP concluded by commending the work that Ash Shahada and FIRD are doing; providing housing for people in Lambeth and Southwark, building cohesion and breaking down the divisions between communities; she said it was absolutely vital and as the constituency member of Parliament, she was grateful for it. She offered her full support for the work and wished everyone Eid Mubarak.

Councillor Ibrahim Dogus, Deputy Mayor of Lambeth, said that Eid Ul Adha is a powerful message against extremism and a reminder that human life is not to be sacrificed in God’s name. Commending FIRD and ASHA, he added that more Muslim-led organisations are needed to find answers to complex problems at both a local and global level. He added that it is gatherings like this that keep us rooted in our belief that we can work better together to tackle the issues that face our community. Our resilience to extremism, in all forms and from all sides, is shown in no better way than this interfaith celebration.

Umar Mahmood said that Eid is a time of charity and it is no surprise that Muslims have been found to be the most charitable faith in the UK. It is often that our contributions to society are ignored, which is why the Muslim community should make more noise about the positive work they do. He added that Islamic finance, which includes the charitable act of Zakat, is estimated to reach £2.3tn by 2020 globally and could support the sustainable development goals of the UK if the government are willing to listen to the Muslim community. Speaking on islamophobia being fanned by politicians and far right extremists, he said that it is a testament to our diverse community spirit that we come together to celebrate the positive times rather than showing our strength during bad times. He said that coming together to celebrate and share our commonalities serves to counter the extremists that want to divide us.

Mayor of Southwark Catherine Rose said that she was pleased to attend the Eid reception on behalf of the people of Southwark as a sign of appreciation for the work being carried out by FIRD and ASHA. She said it was vitally important that people have good homes and their lives are secure. Vulnerable need to be able to trust the organisations that they rely on to provide security during difficult times in their lives and Ash Shahada is a great source for that because it helps those vulnerable people restart their lives. She said that the Muslim community is warm and welcoming, so it is immensely important that work by Muslim-led organisations like Ash Shahada continues. The Mayor added that she appreciated the work of the support officers, carers, faith organisations and volunteers that ensure that this work is being carried out and should be recognised.

Councillor Liaquat Ali MBE, Chairman British Muslim Mayors Association, commended the work that FIRD had been doing for over fifteen years and urged more organisation to emulate the working methods to be successful in the future. He added that it was important that Muslims take the lead, as they have been doing for a long time, to break down barriers of extremism. Shokat Ali, Chairman British Muslim Friends of Labour, welcomed the initiative of Muslim led organisations in inviting non-Muslims to celebrate in the Eid festivities to help greater understanding and learning of the faith. He added that Muslims around the world are proud of the work being carried out here.

Prince Kamanda, board member of Ash Shahada Housing Association, offered his warm thanks to all who attended, stating that the organisation is a true case study of interfaith in action by having non-Muslims in the board, such as himself. He said that God is looking for people to love each other and communicate between each other, just as God would talk to Adam and Eve. Referring to the Bible’s “give honour to whom honour is due”, Prince Kamanda appreciated the dedication and effort that Umar Mahmood had put into building bridges between communities and different faiths. Alongside Helen Hayes MP, Mayor of Southwark Catherine Rose, Councillor Liaquat Ali MBE and Toaha Qureshi MBE, a certificate of recognition “for over a decade of services to interfaith harmony and community cohesion” was presented to Umar Mahmood. He said he was grateful for the recognition and pledged to continue to work to bring faiths closer together and provide opportunities for dialogue. At the conclusion of the reception, special guest Rear Admiral Dr Nassar Ikram HI (M) SI (M), Pro Rector of National University of Sciences and Technology (NUST), was presented with the newly published book Qayam e Aman aur Aqwam e Alam authored by Toaha Qureshi MBE.